Yale technology is giving astronomers a closer look at the atmosphere of a distant planet where it’s so hot the air contains vaporized metals.

The planet, MASCARA-2 b, is 140 parsecs from Earth — or roughly 2.68 quadrillion miles. It’s a gas giant, like Jupiter. However, its orbit is 100 times closer to its star than Jupiter’s orbit is to our Sun.

The atmosphere of MASCARA-2 b reaches temperatures of more than 3,140 degrees Fahrenheit, putting it on the extreme end of a class of planets known as hot Jupiters. Astronomers are keenly interested in hot Jupiters because their existence had been unknown until 25 years ago and they may offer new information about the formation of planetary systems.

“Hot Jupiters provide the best laboratories for developing analysis techniques that will one day be used to search for biosignatures on potentially habitable worlds,” said Yale astronomer Debra Fischer, the Eugene Higgins Professor of Astronomy and co-author of a new study that has been accepted by the journal Astronomy and Astrophysics.

Fischer is the guiding force behind the instrument that made the discovery possible: the Extreme PREcision Spectrometer (EXPRES), which was built at Yale and installed on the 4.3-meter Lowell Discovery Telescope near Flagstaff, Ariz. 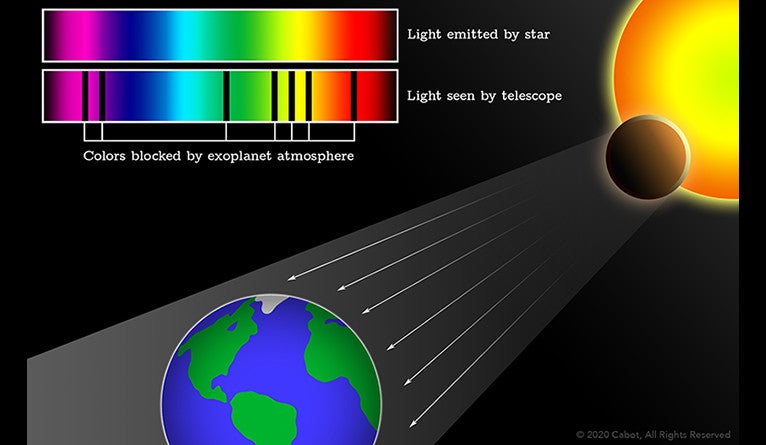 The primary mission of EXPRES is finding Earth-like planets based on the slight gravitational influence they have on their stars. This precision also comes in handy when looking for atmospheric details of far-away planets, the researchers said.

Here’s how it works.

As MASCARA-2 b crosses the direct line of sight between its host star and Earth, elements in the planet’s atmosphere absorb starlight at specific wavelengths — leaving a chemical fingerprint. EXPRES is able to pick up those fingerprints.

Using EXPRES, Yale astronomers and colleagues from the Geneva Observatory and Bern University in Switzerland, as well as the Technical University of Denmark, found gaseous iron, magnesium, and chromium in MASCARA-2 b’s atmosphere.

“Atmospheric signatures are very faint and difficult to detect,” said co-author Sam Cabot, a graduate student in astronomy at Yale and leader of the study’s data analysis. “Serendipitously, EXPRES offers this capability, since you need very high-fidelity instruments to find planets outside our own solar system.”

The study’s lead author, astronomer Jens Hoeijmakers of the Geneva Observatory, said EXPRES also found evidence of different chemistry between the “morning” and “evening” sides of MASCARA-2 b.

“These chemical detections may not only teach us about the elemental composition of the atmosphere, but also about the efficiency of atmospheric circulation patterns,” Hoeijmakers said.

Along with other advanced spectrometers such as ESPRESSO, built by Swiss astronomers in Chile, EXPRES is expected to collect a wealth of new data that may dramatically advance the search for exoplanets — planets orbiting stars other than our own Sun.

“The detection of vaporized metals in the atmosphere of MASCARA-2 b is one of the first exciting science results to emerge from EXPRES,” Fischer said. “More results are on the way.”

The study was published in Yale University