You know how you leave space in a water bottle before you pop it in the freezer—to accommodate the fact that water expands as it freezes? Most metal parts in airplanes face the more common opposite problem. At high altitudes (low temperatures) they shrink. To keep such shrinkage from causing major disasters, engineers make airplanes out of composites or alloys, mixing materials that have opposite expansion properties to balance one another out.

New research conducted in part at the U.S. Department of Energy’s Brookhaven National Laboratory may bring a whole new class of chemical elements into this materials science balancing act.

As described in a paper just published in the journal Physical Review Letters, scientists used x-rays at Brookhaven’s National Synchrotron Light Source II (NSLS-II)—a U.S. Department of Energy Office of Science user facility—and two other synchrotron light sources to explore an unusual metal that expands dramatically at low temperature. The experiments on samarium sulfide doped with some impurities revealed details about the material’s atomic-level structure and the electron-based origins of its “negative thermal expansion.”

This work opens avenues for designing new materials where the degree of expansion can be precisely tuned by tweaking the chemical recipe. It also suggests a few related materials that could be explored for metal-mixing applications.

“In practical applications, whether an airplane or an electronic device, you want to make alloys of materials with these opposite properties—things that expand on one side and shrink on the other when they cool down, so in total it stays the same,” explained Daniel Mazzone, the paper’s lead author and a postdoctoral fellow at NSLS-II and Brookhaven Lab’s Condensed Matter Physics and Materials Science Department.

But materials that mimic water’s expansion when chilled are few and far between. And while the expansion of freezing water is well understood, the dramatic expansion of samarium sulfide had never been explained.

Like other materials Mazzone has studied, this samarium-based compound (specifically samarium sulfide with some yttrium atoms taking the place of a few samarium atoms) is characterized by competing electronic phases (somewhat analogous to the solid, liquid, and gaseous phases of water). Depending on external conditions such as temperature and pressure, electrons in the material can do different things. In some cases, the material is a gold-colored metal through which electrons can move freely—a conductor. In other conditions, it’s a black-colored semiconductor, allowing only some electrons to flow.

The golden metallic state is the one that expands dramatically when chilled, making it an extremely unusual metal. Mazzone and his colleagues turned to x-rays and theoretical descriptions of the electrons’ behavior to figure out why.

At NSLS-II’s Pair Distribution Function (PDF) beamline, the scientists conducted diffraction experiments. The PDF beamline is optimized for studies of strongly correlated materials under a variety of external conditions such as low temperatures and magnetic fields. For this experiment, the team placed samples of their samarium metal inside a liquid-helium-cooled cryostat in the beam of NSLS-II’s x-rays and measured how the x-rays bounced off atoms making up the material’s crystal structure at different temperatures.

“We track how the x-rays bounce off the sample to identify the locations of atoms and the distances between them,” said Milinda Abeykoon, the lead scientist of the PDF beamline. “Our results show that, as the temperature drops, the atoms of this material move farther apart, causing the entire material to expand up to three percent in volume.”

The team also used x-rays at the SOLEIL synchrotron in France and SPring-8 synchrotron in Japan to take a detailed look at what electrons were doing in the material at different stages of the temperature-induced transition.

“These ‘x-ray absorption spectroscopy’ experiments can track whether electrons are moving into or out of the outermost ‘shell’ of electrons around the samarium atoms,” explained co-corresponding author Ignace Jarrige, a physicist at NSLS-II.

If you think back to one of the basics of chemistry, you might remember that atoms with unfilled outer shells tend to be the most reactive. Samarium’s outer shell is just under half full.

“All the physics is essentially contained in this last shell, which is not full or not empty,” Mazzone said.

The electron-tracking x-ray experiments revealed that electrons flowing through the samarium-sulfide metal were moving into that outer shell around each samarium atom. As each atom’s electron cloud grew to accommodate the extra electrons, the entire material expanded.

But the scientists still had to explain the behavior based on physics theories. With the help of calculations performed by Maxim Dzero, a theoretical physicist from Kent State University, they were able to explain this phenomenon with the so-called Kondo effect, named after physicist Jun Kondo.

The basic idea behind the Kondo effect is that electrons will interact with magnetic impurities in a material, aligning their own spins in the opposite direction of the larger magnetic particle to “screen out,” or cancel, its magnetism.

In the samarium-sulfide material, Dzero explained, the almost-half-full outer shell of each samarium atom acts as a tiny magnetic impurity pointing in a certain direction. “And because you have a metal, you also find free electrons that can approach and cancel out these little magnetic moments,” Dzero said. 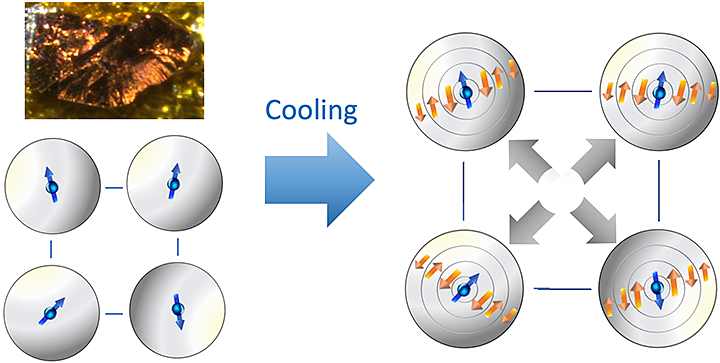 Each samarium atom in a sample of golden samarium sulfide (inset photo) has a tiny magnetic moment (blue arrows). When cooled, a phenomenon called the Kondo effect causes some of the free electrons in the metal (yellow arrows) to move into the samarium atoms’ outermost electron shell to screen these magnetic moments, resulting in a dramatic expansion of the material at low temperatures.

Not all elements subject to the Kondo effect have electrons fill the outermost shell, as it can also go the other way—causing electrons to leave the shell. The direction is determined by a delicate energy balance dictated by the rules of quantum mechanics.

“For some elements, because of the way the outer shell fills up, it is more energetically favorable for electrons to move out of the shell. But for a couple of these materials, the electrons can move in, which leads to expansion,” Jarrige said. In addition to samarium, the other two elements are thulium and ytterbium.

It would be worth exploring compounds containing these other elements as additional possible ingredients for creating materials that expand upon cooling, Jarrige said.

Finally, the scientists noted that the extent of the negative thermal expansion in samarium sulfide can be tuned by varying the concentration of impurities.

“The application of highly developed many-body theory modeling was an important part of the work to identify the connection between the magnetic state of this material and its volume expansion,” said Jason Hancock, a collaborator at the University of Connecticut (UConn). “This collaboration between Kent State, UConn, Brookhaven Lab, partner synchrotrons, and synthesis groups in Japan could potentially guide new materials discovery efforts that make use of the unusual properties of these rare-earth materials.”

The study was published in Brookhaven National Laboratory

Solving ‘barren plateaus’ is the key to quantum machine learning

Quantum wave in helium dimer filmed for the first time